Watching a big boxing card might cost you a lot, especially when it is offered on Pay Per View. Luckily there is a new kid on the block that has become a Unicorn of Boxing and sports streaming in just three years of its establishment.

DAZN pronounced as DA-Zone, is a content streaming service established in 2016 and is primarily focused on boxing for subscribers in the US and have now opened up to territories around the world. They provide innovative boxing streamline technology that differentiates them from other sport content publishers.

However for the month December, DAZN are offering a a brilliant offer for those countries it has just launched in check it out – don’t miss out!

Here is my review on DAZN below.

When you subscribe with DAZN, you also get access to top-notch boxing events and other sports such as Mixed Martial Arts (MMA), cricket, darts, Japanese soccer, Football, Baseball, basketball, volleyball, gymnastics, snooker, formula one and a lot more.

You also stream some exclusive behind the scene contents such as replays, interviews, and lots more. The organization is still growing and signing up more stars to their already menacing stable of fighters. No need for the extra PPV fees, which have been a major bottleneck for boxing fans around the world. Everything is included with your DAZN membership.

According to Forbes, DAZN streams about 20,000 events a year.

DAZN is a trailblazer that has now overtaken the ‘MLB at Bat’ (major league baseball app) as the highest-grossing sports streaming app, according to many Mobile Analytic firms.

If you are a boxing fan, here is why you need to subscribe now below:

Some of the biggest boxers and sports personalities are signed or fight on with DAZN. This includes Saul ‘Canelo’ Alvarez, who is probably the biggest boxing stars in the world, along with Anthony Joshua, who is also huge name in the UK and worldwide. Former middleweight king, Gennady ‘GGG’ Golokvin has also signed on with the streaming platform. This means a single subscription would give you the opportunity to watch these three boxing super stars. Other notable fighters signed on with the streaming service include:

What Countries Is DAZN Available?

DAZN’s main audience is the US, but the streaming organization has also broke into 200 new territories such as the UK, Ireland, Australia, New Zealand, South Africa, Italy, Canada, Brazil, Austria, Japan, Germany, Switzerland, Spain and many more obviously!

DAZN is signed with Matchroom Sports, which is the biggest boxing promotional outfit in the UK and one of the biggest in the world. They are also signed with Oscar De La Hoya’s Boxing promotional outfit Golden Boy too. They also have deals with other notable promoters including Lou Di Bella and  the annual World Boxing Super Series, amongst others. DAZN also offers Mixed Martial Arts fights from the promoters of Bellator, KSW, and Combate Americas.

In other ways to extend its reach, DAZN has partnered with the likes of Basketball star Lebron James and Global soccer icon Cristiano Ronaldo as Ambassadors of the streaming service. In just a single year, DAZN has become a must-have for fight fans around the world.

The price of PPV is ridiculously high, and most times, you pay for a non-competitive fight. DAZN keeps you entertained with about 100 boxing events in a year featuring the biggest stars in the world, including other sports. DAZN covers the sports niche better than any other service and is your one-stop platform to watch fight cards every week.

There are no charges for pay per view (PPV), no blackout, and you get high profile and championship fights.

DAZN’s US monthly subscription costs $19.99 per month or $99.99 for the annual plan. The annual plan amounts to $8 per month, which is ideal for you, considering that a single PPV event would cost you as high as $70 -$90.

You get to watch more than 100 fight cards with your annual subscription and a host of other sports.

You do not have to shell out more money to watch PPV events unlike other services like Showtime, Fox and ESPN+. If you are subscribed to these other services, you would have to shell out Pay per view fees in other to watch some events. DAZN is economical and offers you the best value for money with its unrivalled pricing plan and quality boxing events streaming at 1080p.

With DAZN, you get over 100 fight nights a year without the pain of pay-per-view, live and on-demand

DAZN events can be streamed on the web or mobile app. The web interface is very tidy with a black background and a white text with appealing elements. At the top, you would find Schedules, Home, Sports menu items, search field, Help, and other icons. You can also change your language, view your subscription plan, upcoming events, and lots more.

You can download the DAZN app for your favorite devices such as Amazon fire device, Mac, and Android mobile device through the store. DAZN can also work on gaming consoles such as Xbox, PlayStation 4, or even streamed on your laptop/desktop. Even if you want to watch on your smart TV, you can. Simply download a casting app Such as Roku or Chromecast and cast to your TV. 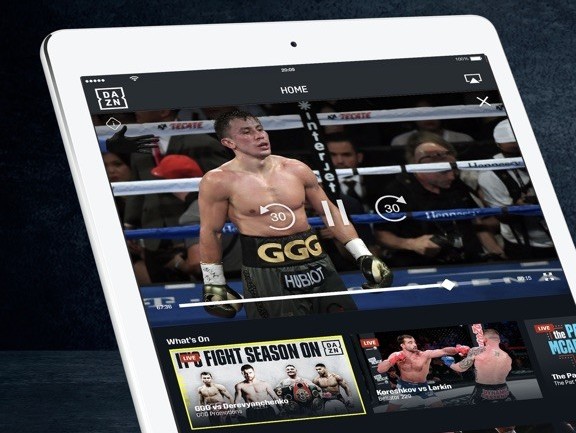 No matter your platform or device, the DAZN app can seamlessly run on it, and you would have no issue signing in or streaming events. The streaming quality is excellent with an optimal performance that rivals YouTube streaming. You can also customize font, color, language, size, text background, and lots more.

All of the fights that are streamed on the platform can be rewinded or replayed as well. This means no matter when you tune in to watch a fight or event, you can always rewind it to the beginning.

DAZN is a game-changer giving sport fans the flexibility and control to watch boxing and other sporting events the way they want. The setup is rapid, and you do not need a satellite or cable to view events. You can easily watch a sports event on multiple devices or go for a very affordable price. It’s certainly a great time to be a fan of the sweet science.

DAZN has made it possible to watch quality boxing events almost on a weekly basis. To take advantage of the massive sports programming and flexibility offered by DAZN, sign up here either for the monthly plan or annual plan. There has already been a lot of compelling bouts in a difficult year and next year promises to be much better for the streaming behemoth.

This month DAZN are offering a