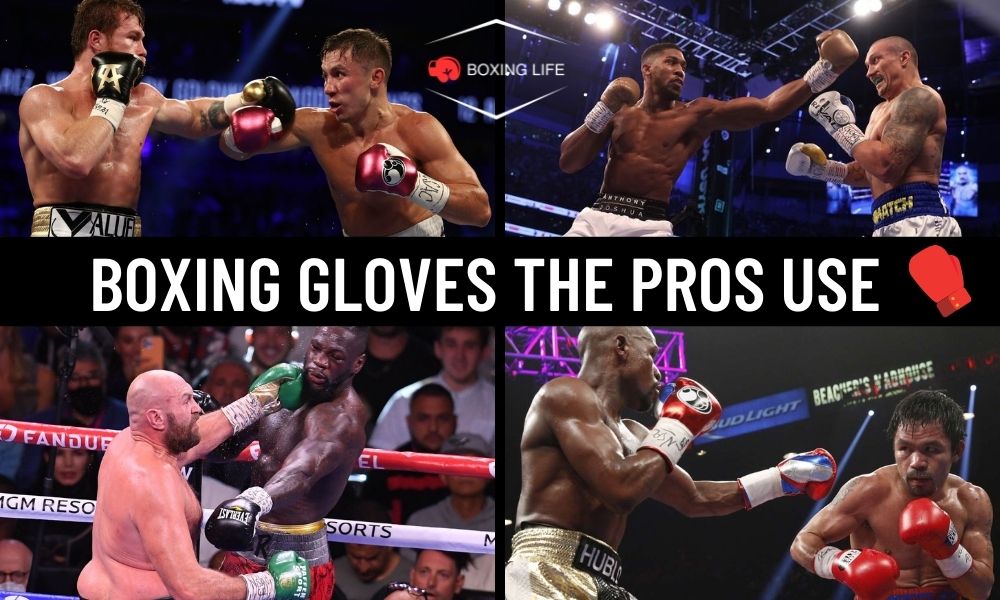 Now over the years since writing here on Boxing Life, a question I get often through email and my social media channels is, “What boxing gloves does [this boxer] use?”.

For the most part, a lot of fighters will use different training gloves, compared to when competing. Or even sometimes they might be contracted to wear specific gloves depending on the fighter agreement. Some fighters may be sponsored by a specific brand where they have to wear gloves for all purposes.

There are also so many different glove brands out there, that so many can be unsure where to start. However, many people would immediately prefer to just trust what the very best fighters are wearing.

To help you out I have put together a list of images and links of some of the biggest fighters past and present. Along with the brands they have been seen to use during training and competition.

What boxing gloves does Canelo use?

Canelo most recently has been seen to box with his own brand of gloves No Boxing No Life which is slowly becoming a very popular glove among professionals to use. Including the likes of Gervonta Davis, and Ryan Garcia using them.

He used to be sponsored by Everlast where he wore the famous MX Everlast gloves for many of his fights. Canelo has also worn Winning gloves in the first fight with Gennady Golovkin and Grant gloves in his fight with Floyd Mayweather Jr.

What boxing gloves does Gennady Golovkin use?

Triple G has permanently opted to fight in Grant Gloves for the majority of his career. However, for training we often see him wearing Custom Japanese Winning Gloves with GGG.

What boxing gloves does Anthony Joshua use?

The British heavyweight for the majority of his fights has opted for Rival’s Guerrero Gloves. However, he also chose Grant gloves in his bout with Dillian Whyte and first defeat against Andy Ruiz.

For training, Joshua has worn many different gloves including Cleto Reyes, Ringside, and Rival training gloves.

What boxing gloves does Tyson Fury use?

Tyson Fury through the years has mainly used Everlast boxing gloves. Including the original Everlast Powerlock gloves and even the Everlast MX gloves which are known as puncher gloves.

However, he has most recently been using the German brand Paffen Gloves. Fury has used these for both his training and fights against Wilder in their trilogy. The heavyweight star also used them vs Dillian Whyte at Wembley stadium. These were also the gloves he wore to defeat Klitschko.

What boxing gloves does Deontay Wilder use?

The Bronze Bomber from Alamaba has always opted to use Everlast boxing gloves for both his training and competitive bouts.

From what I have seen, he loves to use the Everlast Powerlock gloves which are known to give more protection to your hands. When you consider Wilder’s punching power and the number of people he has knocked out, this is probably a sensible glove for him to protect his hands. However, he has used the Everlast Mx gloves in some of his fights.

What boxing gloves did Floyd Mayweather Jr use?

Throughout Mayweather’s career, he had a lot of hand problems and injuries. For this being the case he would often be seen to use Winning Gloves for training for protection.

While he would opt for Grant gloves for his bouts. These are often used by fighters who need extra hand protection in a fight. But aren’t too heavily padded and will do enough damage to your opponent.

What boxing gloves did Manny Pacquaio use?

Like most of the top champions, Manny Pacquiao would use Winning Gloves for all his training.

However, he opted for the famous Mexican Cleto Reyes Gloves for fight nights which are well known for being puncher gloves. When you consider how many opponents Manny KO’d in his career this no doubt certainly gave him the confidence.

What boxing gloves does Errol Spence use?

Spence for the majority of his career has used Everlast’s Powerlock gloves, Elite Pro Fight Gloves, and the classic-looking 1910 Everlast sparring gloves. I wouldn’t be surprised if he is of course sponsored by Everlast to wear these gloves.

I’ve also seen him using Winning gloves too in some of his training sessions.

What boxing gloves does Terrence Crawford use?

Terence Crawford is another fighter that opted to use Everlast boxing gloves throughout the majority of his career.

Much like with potential future opponent Spence. Crawford has trained with Everlast Powerlock gloves. But has used Everlast’s MX gloves and the Everlast Elite Pro fight Gloves in his fights.

What boxing gloves did Mike Tyson use?

Back when Tyson was fighting there wasn’t nearly as many boxing glove option as there is today.

However, we would often see him wear the classic Everlast red boxing gloves. While towards the end of his career he would be seen wearing the Cleto Reyes gloves (See above vs Lennox Lewis).

What boxing gloves did Muhammad Ali use?

The Greatest tended to use 8oz Everlast boxing gloves back in the 60s and 70s. This was often a go-to boxing glove for many fighters back in that time period. He would use these gloves for the majority of his career.

Nevertheless towards the end of his career as more boxing glove brands came out. He was seen wearing Cleto Reyes boxing gloves in his bout vs Spinks.

What boxing gloves does Oleksandr Usyk use?

He also has a close relationship with Rival boss Russ Anber who has been in his corner for some of his biggest fights. He has been seen to use Cleto Reyes gloves on a couple of occasions too. I have seen him use a lot of the whole range of Rival’s boxing gloves in his training. While there are also videos and clips of him using Paffen boxing gloves.

What boxing gloves does Vasyl Lomachenko use?

Lomachenko like his countryman would also wear Rival boxing gloves for a lot of the beginning of his professional career. He even had a limited edition Loma version created for him.

However, he opted to sign a huge deal with the martial arts brand Venum. And now exclusively wears their gloves for training and fights for the time being.

What boxing gloves does Naoya Inoue use?

Being from Japan, it is quite obvious what you can expect The Monster Naoya Inoue to wear. That is of course Winning boxing gloves. He mainly uses these gloves for both training and his fights.

However, he also used Grant’s gloves in some other fights, and in the second fight with Donaire, he decided to wear the Mexican Cleto Reyes gloves.

Tank Gervonta Davis has opted to use a few brands of gloves throughout his career, including, Grant, No Boxing No Life, and Winning.

He is mainly been seen to wear Winning gloves in any of his training footage. While for his competitive bouts has prepared to use Canelo’s No Boxing No Life brand. These are definitely puncher’s gloves which no doubt suits Tank in his ability to damage.

Why not check out more boxing gloves options here to see if anything else picks your fancy.

You can also read my other use boxing-related article below:

Having looked around online there are so many “best boxing gloves” articles that are truly false.  This is so frustrating for me as many are recommending awful gloves that I personally would...

What are the best boxing gloves for beginners? If you are reading this article you are probably just about to start boxing or thinking about taking it up. It's a really hard decision which many...