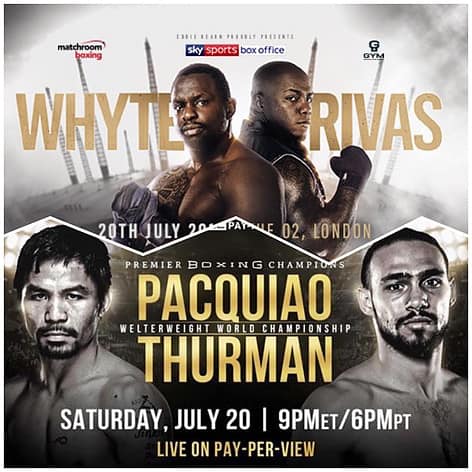 This weekend we have two big boxing events taking place with Dillian Whyte vs Oscar Rivas in the UK and Manny Pacquiao vs Keith Thurman (further below) in the US. Check out my thoughts and predictions on what should be cracking weekend of boxing!

News this week broke that the winner of this fight will go onto to challenge for the WBC world heavyweight belt against Deontay Wilder!

The WBC and Matchroom Boxing are delighted to confirm that Saturday’s bout between Dillian Whyte and Oscar Rivas at the O2 Arena in London will be contested for the WBC Interim World Heavyweight Championship. #WBC #ConquerEverything #Boxing #WhyteRivas pic.twitter.com/lF8hJ2Tu53

It’s been a long wait for an announcement by the WBC, with many suggesting Whyte has been avoided by the American world champion and the belt leaving America itself. He’s also had to go around getting another world title fight by winning 9 bouts defeating the likes of Chisora, Helenius, Browne, Parker and Chisora again to get his shot. Finally, he also had to wait over 600+ days before the WBC finally communicated this which must have been really frustrating time.

Saying all that, Whyte himself will be up against one of his toughest opponents to date, but after waiting this long he must not lose focus or this could be a big banana peel to slip on for Dillan if he’s not careful.

His opponent, Oscar Rivas, (26 – 0 – 18 KOs) is not going to be and easy fight Whyte and has the potential to cause the British heavyweight lots of problems throughout their bout.

Rivas is very much a quick starter and with some physical disadvantages to Whyte include height and reach – I feel the Colombian may  come out all guns blazing in the opening rounds. One thing I’ve noticed about him (similar to Joshua) is he does tend to gas out quite quickly and I wouldn’t be surprised at all if we see Whyte fighting on back foot in the earlier rounds to take him to deep water to finish him off as he starts to tire. 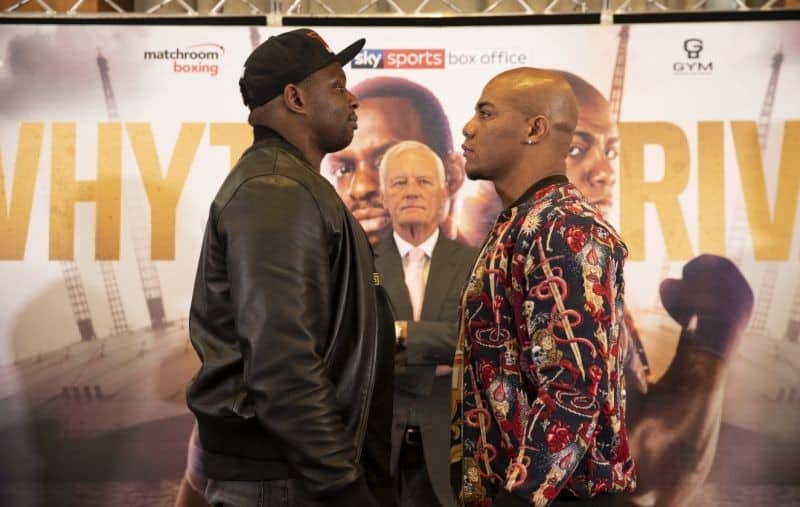 Saying that there should be caution in the air, as we all saw what the South American did to Bryant Jennings in the last round to win a fight which he was also about lose. Whyte will need to be careful of his intense fast bursts throughout the fight.

In terms of my prediction, I do feel Whyte has the physical and style edge in this one. He will be able to cause enough problems for Rivas and try to gas him out to get a late finish over the Colombian. Whyte KO.

I must admit I really like the undercard for this one, it is not the best talent on display, but it’s the night of big men (heavyweight and cruiserweight) and I’m hoping for some decent fights along with some KO performances. Check out the full undercard below:

This fight probably isn’t the best welterweight clash out there that can happen right now, but with a year of poor match ups throughout boxing, it’s good to see two bigger names come up against each other, even if they are not in their peak anymore.

For me it’s a strange fight as Pacquiao is a boxer I grew up watching during his prime years defeating countless amounts of world champions and to still see him competing at such a high level is truly impressive for a 40-year-old man. He obviously isn’t fighting as often as he once was or even the same quality in opponents, but at this stage of his career he has been matched up very well against fighter who have also passed there best which seems to be working for Philippine so far. 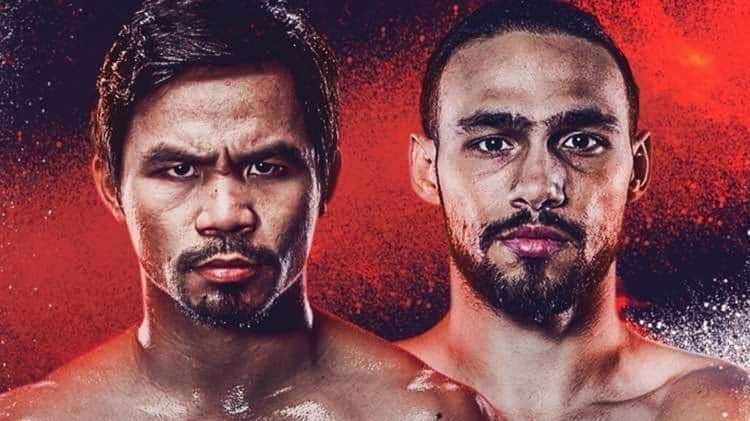 Touching on this point, it will be welterweight champion Keith Thurman who he comes up against on Saturday in Vegas. Thurman has come back this year after a 2-year layoff from the sport due to injury problems and for many he is still very much on the decline with this come back. This is a massive occasion for Thurman and a massive payday so he will no doubt be trying to make the most of this opportunity against the legend that is Pacquaio.

He has been very vocal in the lead up to this fight and I very much expect Thurman to give this a decent shot against the once unstoppable man from the Philippines.

I feel Thurman will very much be on the back foot from the off against Pacquiao, but I expect the American to move around a lot and try counter. Although being in his 40s now, I just feel the experience and boxing IQ of the ‘Pac Man’ is much better than a declining Thurman who is 10 years younger. Pacquiao points decision is most likely.

There is some interesting bouts taking place in the card with the likes of Caleb Plant, Sergey Lipinets, Juan Payano and Yordenis Ugas all fighting on the card which should also make an interesting build up to the main event. See below:

To end this week’s fight preview I want to express my condolences to one of the greatest boxers of all time in Pernell “Sweet Pea” Whitaker. It was really sad to hear the news that he had passed away in such a tragic incident at the age of 55 – he was taken way too soon.

I think it’s a great reminder to us all that anything can happen in life when we least expect it. But it’s also been incredible to see the boxing and fight fan community come together to appreciate the life, achievements and legacy he will leave for generations to come.

I hope and I’m sure the boxing events taking place this weekend will show their appreciation to one of the greatest to lace it up. I’ll leave you with amazing video of ‘Sweet Pea’ in action by Hanzagod. RIP Champ