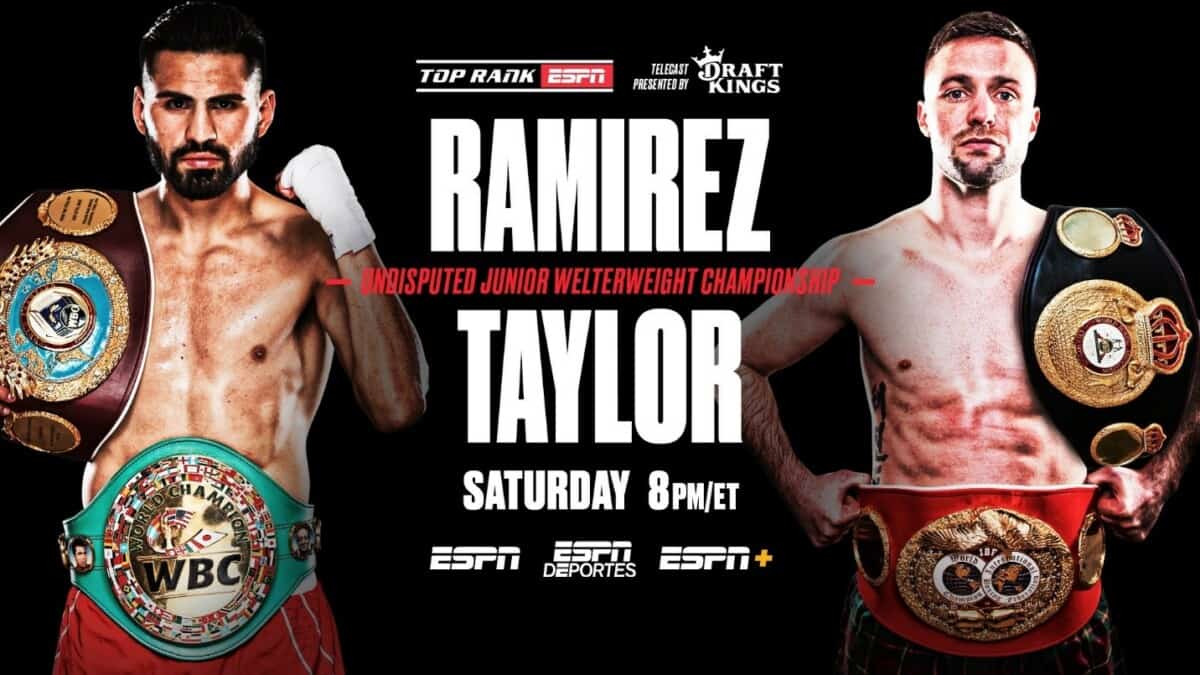 This week will see another historic boxing fight as Jose Ramirez and Josh Taylor go head to head to become the next undisputed boxing champion.

The two fighters both have impressive records and all action styles which should hopefully see a potential fight of the year!

All four belts are on the line, and the boxing world will all be watching to see who comes out on top. You don’t want to miss it!

As a Scotman myself, I will of course be backing Josh Taylor and I do honestly believe he will come up with the goods on Saturday to get the win.

However, that is not to say Ramirez cannot cause problems to win this fight at the weekend. He is an intelligent pressure fighter who works under the tutelage of world class trainer Robert Garcia which is a big plus. In fact I see a lot of Marcos Maidana in him and is able to close the distance brilliantly. His hand speed is also fantastic when up close and leaves no prisoners behind. Just check this clip of him against Hooker when he unified.

On Saturday, he will no doubt try to apply that pressure on Josh Taylor and see if the Scottish boxing star can handle his relentless pressure.

If Ramirez does this I feel he could fall victim to Taylor. Many fighters have applied this tactic before on him and it doesn’t usually end well as he has a very underrated counter punch ability. He also has the ability to fight on the inside and outside, plus he is Southpaw.

Nevertheless, Taylor has been known to get dragged into unnecessary inside fighting in some of his fights, where I think he is better at longer range. If Ramirez can drag him into a fight up close, you never know.

However, sometimes this plays into Taylor’s hands as he tremendous body puncher up close! This something I feel Ramirez will need to careful of come Saturday, as the WBSS champion likes switch stances subtly and catch his opponents with a surprise right hook from different angles.

Final thoughts and how to watch

Having personally seen Josh Taylor fight a couple of times in the flesh now, you can tell he has the aura of a special fighter. A win on Saturday will cement him as one of Scotland and Britain’s greatest ever boxers in my opinion as the first to win all four belts in one division! Something many never come close to.

Personally I think the Scotsman is already in the top 10 p4p and has really fought some great fighters throughout his short career to date. (17-0-13kos)

I know it will seem I’m being biased in what I’m saying, but I can’t see past but the thirsty year old winning on Saturday. I always like to see an upset in boxing and Ramirez can pull it off, he’s just going to have to have the performance of his life to do so!

You can watch Ramirez vs Taylor on FITE, May 22nd outside the US – sign up here.

If you are in the USA you can watch on ESPN.