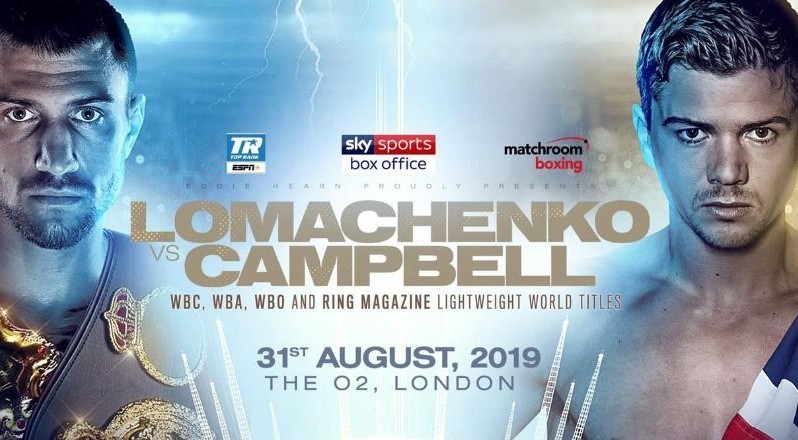 This weekend we have p4p one of the best ever back in action in Lomachenko, who faces fellow Olympic gold medalist Luke Campbell at the O2 in London. I think this will be a fight where most boxing and fight fans will be tuning in to see this once in generation fighter step in the ring again. I’ll also be giving a quick round up of the undercard and my predictions for each.

Lomachenko is very much on the hunt to become the undisputed lightweight champion and would be the first to do so since Pernell Whitaker in the 90s. It’s about legacy for this guy and he will want to continue his journey of domination by getting another convincing win over Campbell on Saturday.

Now you don’t need me to tell you, but we all know his skills and pedigree are just sublime for anyone to watch either if you are hardcore fan or casual it’s a must. In terms of the fight this Saturday however, Loma has a slightly different challenge and will be facing a very rangy and talented southpaw in Luke Campbell.

Loma will of course have a game plan as usual this Saturday, and I think he will need to apply a lot of pressure, similar to what he did to Crolla in his last fight. The presence and hype around him I feel can cause some fighters to panic when in the ring and make mistakes they normally wouldn’t do and also not knowing what Loma will do next after every move is probably one of his greatest strengths that causes problems.

Now for Luke Campbell, I do think he has a chance on Saturday that he can pull off a massive upset – I just feel in the case of his opposition it will be a punchers chance. There is no way Campbell will outbox Loma on Saturday and he will need to try use his own strength to his maximum ability.

Unfortunately for Campbell, he is not a guy that will try rough Loma up on the inside or in general I feel. Unlike someone like Salido the only man to beat Loma who did employ these tactics. He hecently gave his thoughts on way to beat him – check it out here. So it will be interesting to see his own tactics when he comes out on Saturday. I think we all need do need to remember that Campbell is probably one of Britain greatest ever amateurs and although it maybe hasn’t gone to plan in pros so far he’s had some tough luck along the way.

Now I’ve watched back  Campbell against Linares now (Who Loma beat) and he had a very indifferent start where he was knocked down quite early. He did however come back into fight to make is very close affair in the end. He lost by split decision, but I was impressed by how he held Linares at bay and really frustrated him at times to get close enough.

What people forget is Campbell’d Dad had just passed away two weeks before he had world title fight, a very hard situation for anyone to deal with and probably should of pulled out (something he admitted to later). I imagine his mind will be a lot more focused for this one and I feel a similar blue print is needed in this fight to cause Loma some problems.

Lomachenko of course manged to stop Linares with a sickening body shot in their fight and I imagine that it will be an aim for the Ukranian against Campbell this Saturday. He himself was also put down by Linares, which shows the jump in weight divisions can still show that you feel those big shots regadless how good you are.

Now in terms of how I think the fight will go – well I think I’m with 95% of people that think Lomachenko will win, it really is that simple. He is a sublime talent and I’m expecting him to put another impressive display, let’s just hope Campbell can give him his toughest challenge to date for good fight. Lomachenko TKO

I’ve never been the greatest Hughie Fury fan, but fair play to him stepping in with Povetkin in his first fight with Matchroom. He’s still a very young heavyweight and his taken on some very hard challenges to date including a world title fight agaisnt Parker and a fight against Pulev in Bulgaria. Let’s wait and see how he handles Povetkin who may be past his prime, but is still very much a beast in the ring that that KO power we all aware of.

See the undercard below and my prediction on each fight:

I’ll leave with the “What It Takes” documentary on Luke Campbell as he approaches the fight with Lomachenko (see below). A really interesting watch!

Enjoy the fight and thanks for reading!