This weekend we have a cracking clash between two unbeaten British heavyweight prospects in Daniel Dubois and Nathan Gorman as they go all out for the British title. Not only that the ‘Heavy Duty’ fight night will also have a fantastic lineup on the undercard which will offer British boxing fans a brilliant night to tune in for.

In this preview I’ll give you my thoughts on Dubois and Gorman along with those fighting on the undercard.

Starting out with the fight everyone will be talking about this weekend in the UK, Dubois and Gorman will likely go one of two ways in my opinion. Complete dominance over another or a close split decision which may be quite controversial. So let’s consider what each fighter will bring to the table this weekend…

Daniel Dubois, after turning pro at the age of 19, he has continued to improve and be known for his dangerous KO power (91% KO rate) which most fighters are very aware and cautious of when entering the squared circle with him. The test for Dubois this weekend will be coming up against a fighter who likes to box, jab and use quick combination punching. This is something he probably isn’t used facing too often, even in sparring.

The fight will without a doubt be a puncher vs the boxer, but the plus side for Dubois is he does have the ability to KO anyone in the division and this is something Gorman will need to be weary of throughout their bout on Saturday night.

It can be quite hard to liken Dubois as he doesn’t have the greatest personality in the world and can be quite robotic at times in his interviews. But he’s still a young kid and there must be a lot of pressure on the young man from the media and social media that makes him a more subdue character.

When it comes to boxing and fight night however, the ‘dynamite’ does come out of his shell and he’s produced some devastating KOs in his short career so far which does make him fighter people want to watch. 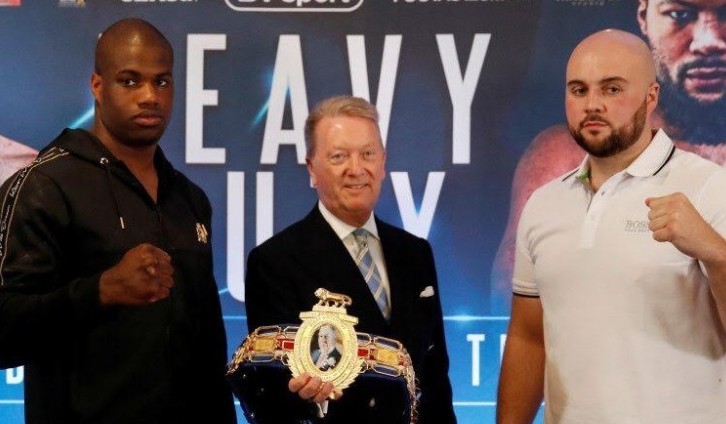 Nathan Gorman on the other hand is very much the opposite to Dubois in the sense of personality and boxing style. Training out of Manchester with Ricky Hatton and also training alongside the likes of Tyson Fury and Billy Joe Saunders now – he will have no doubt learnt a thing or two off these world champions who we all know love to box and move.

I feel this is very much part of Gorman’s identity now and is known for his very quick hand speed and combination work which break down opponents gradually, rather than a one KO punch.

For boxing purists it’s nice to see an up and coming prospect with this type skill set in the heavyweight division. We are so used to seeing a division filled with brutes looking for that one big punch all the time. On Saturday, I expect to see Gorman jab and use quick combinations before moving in and out quickly before Dubois can plant his shots on him.

I also thought it was interesting in the recent BT Sport documentary (bottom of this article), that Gorman claimed he used to outbox and beat Dubois constantly in the amateur GB/England squad. He also very much is claiming Daniel is just kidding himself that he can beat him in his own head. It’s a bold thing to say as sparring is a completely different ball game to being out there under the lights with pressure of the crowd. It will be interesting to see if Gorman’s confidence will shine through on Saturday night.

All in all I’m really am hoping for an exciting heavyweight clash this weekend, as it’s not often you get two unbeaten prospects fight this early in their career nowadays. So I do give both of them much respect for taking the fight. I just hope it isn’t a stinker or boring clash (Okolie vs Chamberlain comes to mind), where they both are very cautious to take chances. In terms of who I think will win, I’m leaning more towards Gorman and a points decision. That’s not say Dubois will not be able to do a job, but he will have to get a KO to win this one in my eyes. I feel Gorman’s ring IQ at this stage in his career is slightly ahead of his rival and will be enough to get the win. Gorman SD

We also have a cracking undercard supporting this main headlining fight with Joe Joyce, Liar Williams and Sunny Edwards all fighting on the card. I’m expecting a few decent clashes to take place with plenty of KOs inline from the start of the night. See the full undercard below and my thoughts on each fight:

It’s being used as part of a headlining fight, but will definitely be the second fight everyone will want to see on Saturday night. Joyce is coming off a KO victory over Ustinov with new trainer Adam Booth and he will be wanting to take another step in the right direction with a convincing victory over Bryant Jennings.

The American will be a tough competitor for Joyce as he has a lot more experience in the professionals. He has already challenged for a world title against Wladimir Kiltchko in 2015 and faced the likes of Luis Ortiz and Oscar Rivas who will fight Dillian Whyte next weekend. However, he has usually tastes defeat once taking that step up in opposition and will be interesting to see how he does against the former Olympian.

Joyce is very much a slugger who is extremely heavy-handed and if history repeats itself again on Saturday, I very much expect another KO victory in his favour if Jennings decides to try trade blows with him. Joyce TKO

I think this will be a cracking fight! If anyone watched Sharp’s fight with Woodstock you will know we are in for a decent scrap. Same with Jordan McCorry and he is someone I watched a few times now and loves a fight with anyone! Just watch his last fight with Sam Bowen to see what we could be in for in this bout. This one could go either way, but I’m going to back my countrymen in this one. McCorry Points decision

The Welshmen has really rejuvenated his career after his back-to-back losses to former world champion Liar Smith. He definitely has seemed to have improved since moving up to middleweight and I very much expect another KO victory for him against an unknown French fighter in Achour. He will no doubt have to step up in opposition after this fight. Williams TKO

Another cracking fighter to watch is Sunny Edwards and definitely one to challenge for world titles in the future. His brother Charlie Edwards won a world title at the end of last year and he will no doubt be wanting to make another statement to get a world title fight in the near future. Unfortunately for the Mexican Gallardo I think it’s going to be a tough night for him. Edwards Points decision.

That’s all for this week’s fight preview! It’s been a while since I’ve wrote one of these but will be back again with another one next week to cover Whyte vs Rivas and Pacquiao vs Thurman. I’ll leave you with BT Sports No filter boxing documentary below which is definitely worth a watch to get you in the mood.