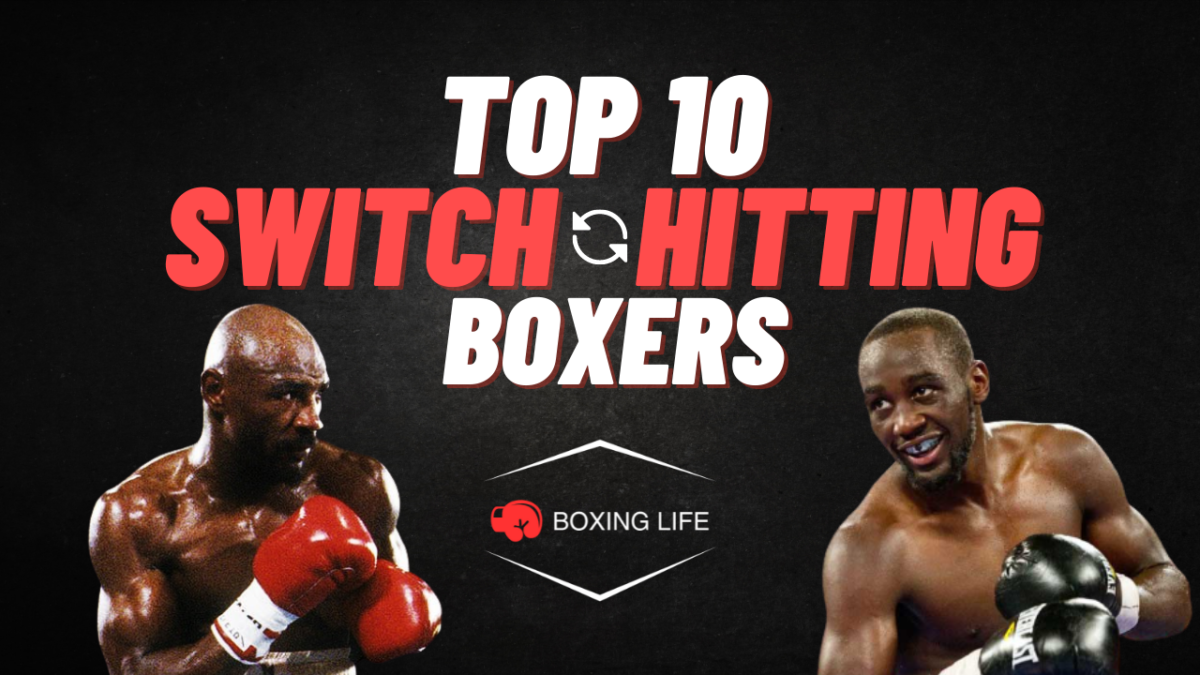 Switch hitters in boxing for the most part are a rare entity. Boxers will of course change stance from time to time, to get a different angle on their opponent to create an opening to attack. But there have been some notable fighters in boxing history and even currently that have done this more often than not to great success.

Watch or read on below to find out who.

Now this may come as a surprise for those reading this, but Sunny Edwards in my opinion has to be one the most natural switch hitters I have ever seen. The IBF flyweight world champion may not be the most known on this list, but he has tremendous ability in switching from southpaw to orthodox and vice versa throughout the fight.

Because he constantly switches between the two stances throughout the rounds. It makes it incredibly difficult for the opponent to figure him out. However, some opponents have caught him while switching stances and he needs to be careful using it too often. He still has a long way to go to prove he is one of the best, but I wouldn’t be surprised if talk about his natural switch hitting style in years to come.

The up and coming welterweight has to be one of the best switch-hitters in the sport right now. He reminds me in some ways of a younger and bigger version of Terence Crawford, with the potential to be just as good in the years to come.

Ennis still has a lot to prove, before he will be considered one the greatest switch hitters, but I wouldn’t be surprised if Ennis is talked about as the best switch hitter in the sport soon. I’m sure more attention will be brought onto him when the opposition steps up as he has been showing off his switch hitting abilities against lesser opponents in devastating fashion. But he certainly has all the skills to take him to the top!

Ward was a tremendous boxing technician in the ring who for the most part could fight comfortably against any style. The American was in fact left-handed and would mainly box as an orthodox fighter throughout his successful career.

During his career Olympic gold medalist picked up an injury to his right shoulder, which made Ward even more reliant on the left hand through a certain stage in his career before he got surgery. Because of this he would switch to southpaw stance on many occasion to land his power punches.

The current 2 x heavyweight world champion has been known to fight as southpaw during his fights. This include fights against Klitschko, Schwartz and his second fight with Chisora. From looking at these fights he likes to use it as a way to create distance and so he can set up his big shots from different angles.

If I’m being honest, he probably most likely does this as a way to confuse his opponent and in typical Tyson Fury fashion, it seems to work! He was more cautious in the Wilder fights doing this, but he did occasionally change stance to catch the Bronze Bomber off guard!

Now maybe not one you would expect to be on this list, but Mike Tyson would often turn southpaw on many occasions to set up his power right hooks to the body and uppercuts. He would also use this stance to set up the left hook from a different angle. Similar to the technique Lomachenko does as Southpaw too!

This was definitely worked for Tyson when he was in his prime, but he didn’t use it as much as his speed started to decline. Nevertheless, the devastation he caused by switch hitting is why I have put him at number 6 on this list!

Now if you haven’t watched this little flyweight Mexican yet! You have to right now as he has to be one of the most entertaining switch hitting boxers I have seen to date! He lives up to using the Mexican style, but will quite often change stance while on the attack and completely overwhelm his opponent!

Some interesting facts about Martinez, is he actually lost his first professional fight by spelt decision and also faced brother of Sunny Edwards (on this list), Charlie Edwards, where he lost his chance to become WBC flyweight champion due to hitting Edwards after knocking him down. Maybe we will get to see his brother Sunny Edwards (number 10) take on Martinez in the future and see a tremendous switch hitter encounter!

Nassem Hamed arguably has to be one Britain’s greatest fighters. When he was in his prime the featherweight was almost untouchable with his showboating and Muhammad Ali esque footwork and style.

Hamed was very unpredictable for the most part and also had tremendous power at featherweight. He gathered an impressive 31 knockouts throughout his 37 professional fights. He will definitely be remembered as one of the most entertaining fighters and switch hitting certainly helped him find the opening for those many of those KOs!

Willie Pep, is probably regarded as one of the greatest fighters ever and was in fact one of the original and best switch hitters. He was however more of an orthodox fighter throughout his incredible career at featherweight with record 229-1-11 (65 KOs).

Bud Crawford for me has to be the best natural switch hitter I have seen. You can’t deny his talent, especially as a three weight world champion and undisputed champion at 140lbs.

He will often come out early in his fights in an orthodox stance. Almost in a way to give a false sense of security for his opponents, as to when he will turn southpaw. However, it’s usually when Bud does turn to southpaw where he has had most of his success in the ring.

Crawford really is a complete fighter in that respect as he can box or fight up on the inside on either stance.

Now it would just be plain wrong if ‘Marvellous’ Marvin Hagler was not number on this list! Hagler for me has to be the greatest switch hitter in boxing history! Primarily a southpaw, Hagler could easily switch between the two primary stances.

Hagler however, would use it to set up shots from different angles, that would completely catch his opposition off guard in the middle of fight. It wouldn’t matter in most cases what stance Hagler was in, as he would often favour the stance depending where his opponent would move.

‘Marvellous’, was always on the hunt to take out his opponent and switch hitting was one the best ways to do this.

Why be a switch hitter?

Well switch hitting can be a very good tactic to use to create panic and confusion in your opponent. It can make them cautious in over committing as there is always the danger of getting countered.

For the most part, fighters will train for a particular style and stance (Orthodox or Southpaw). With one fighter able to switch and change stance during the fight, it can completely offset what the other fighter has prepared for. Often making them have to adapt and sometimes make mistakes.

Should I become a switch hitter?

Yes and no, I always recommend you master your preferred stance whether you are orthodox or a southpaw boxer. As you can tell from the above switch hitters can be very dangerous and it is useful to do in a fight.

But all these boxers have a preferred stance over the other for the most part. It’s all about the timing and set up of when you should change stance, as you could get caught yourself while changing throughout the fight

How can I become a switch hitter?

Practicing both stances all the time! If you are working on combinations on the heavy bag, try doing them in the other stance. Eventually you will also need to work on your footwork to help you get used to the different angles you will throw punches.

A good start to work is trying out the shift technique, which many boxers use, including switch hitters. You can check out my article on this here.

Hope you enjoyed this boxing list, let me know in the comments below who your favourite switch hitter is.

Make sure to check out more similar related articles below or sign up to my boxing newsletter and get 5 Free discounts!

link to Top 12 Advantages Of Being A Southpaw Boxer

Are you a southpaw boxer that wants to know the advantages you have over right handed fighters? Or maybe you are an orthodox fighter wanting to study or know the mindset of a southpaw?  This list...

Terence “Bud” Crawford is arguably one of the most complete boxers in the world today and is in the top 3 in many people’s pound for pound lists. His unique style of being able to switch and...

Watch Canelo vs Bivol on DAZN