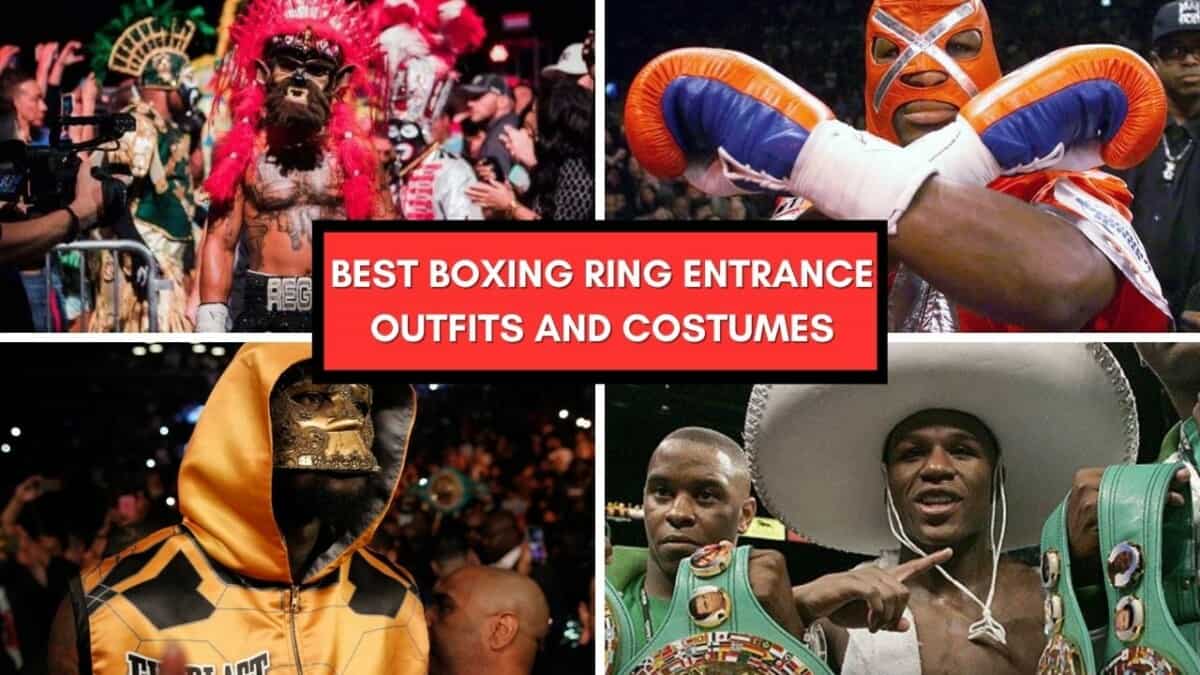 Now over the years we seen some of the most bizarre, but incredible ring walk outfits. Boxers more than ever like to add to the glitz and glamour for fight night. The fans like to be entertained and this is definitely one of the ways to catch the attention of the audience.

In this boxing list, I have created a list of 15 outfits boxer have worn which I think are the best and most creative from over the years. Maybe some of these will give you a good costume idea for Halloween or fancy dress party?

So on that note let’s get right into it!

It’s hard to say what exactly Gervonta Davis was thinking for this one! But it has widely been called smurf head since he came out wearing this in his fight on the undercard of Mayweather vs McGregor

The Ukrainian came out in a very unique jacket which appeared to have a space helmet face mask attached to it. You can only imagine it was shut out the noise from home crowd of 65,000 fans supporting Anthony Joshua. It definitely worked!

Since becoming world champion, Deontay Wilder was known for his impressive ring walk masks, just as much as his knockout power! Maybe this is psychology behind him knocking out so many of his opponents. Even he said himself

“[The mask] has an energy about it that I feed off. Putting the mask on is like a blocker, I zone in. Most definitely it’s a strange feeling.”

There is nothing like a good old fashioned Rocky theme outfit like that of Apollo Creed! Tyson Fury, definitly played up to the American crowd with this tremendous effort!

Bernard Hopkin was originally Nicknamed “The Executioner”, (Further on this list) and later became “The Alien”, Hopkins due to his longevity and ability to continue competing well into his 40s! I have to admit, Bernard has done a terrific job with this one with the florescent green mask!

As you start to tell, Tyson Fury definitely likes a dress up, just like his arch rival Deontay Wilder! In the rematch with Wilder he came out dressed as king on his throne singing the to Patsy Cline’s Crazy (1961).

Might not be the most creative, but will go down in history as a truly eccentric ring entrance!

Now you probably wouldn’t get away with wearing something like this nowadays! But Hector Camacho certainly made the most of fight night with some impressive ring walkout fits. Especially this Indian Chief costume where he showed off his world titles alongside it.

Maybe one of the scariest on this list is of course Michael Hunter’s effort of Predator! he certainly went all out before he faced Povetkin on the undercard of Joshua vs Ruiz 2. Unfortunately, it wasn’t enough to get the American a victory on the night as he was held to a draw.

Another one for Camacho on the list has to be his Roman Soldier effort. Which of course has inspired many more to copy this down the years including the likes of Floyd Mayweather Jr.

Camacho certainly put a lot of thought and time into his outfits!

In his rematch with Ortiz, Deontay Wilder stepped up his mask with a diamond king outfit! He certainly stood out with this one and looked like he meant business on the night. Once again he managed to get an devastating KO over Otriz again!

Before Hopkins would become ‘The Alien’, he was of course firs known as ‘The Executioner’. Wearing his executioner mask while entering the ring he was able to take out some huge names while he became the first undisputed Middleweight champion since Marvin Hagler.

Floyd Mayweather Jr came out wearing the Mexican colours and Sombrero for his super fight with Oscar De La Hoya. This was the coming of age fight for ‘Pretty Boy’ Floyd at the time. This outfit by Mayweather will definitely go down as a classic. Especially as a way to wind up all the Mexican fans that were supporting De La Hoya to beat Floyd that night!

Regis Prograis has to have one of the most defined ring walk masks in modern boxing as he comes out as ‘Rougarou’ For those that don’t know Rougarou is a beastly, werewolf or dog-like creature. the American certainly brings out that attitude come fight any fight.

‘Tank’ Davis came out in a Michael Jackson inspired outfit in his Featherweight title match up and UK debut against Ryan Walsh. He’s also come out in a ‘Thriller’ inspired ring walk since then, but personally I think this one tops it! Davis even has tattoo of Zombie Thriller Michael Jackson on his leg! Much better than the Smurf hood!

Finally we has Deontay Wilder and his Dark Lord / Lord of the Rings Sauron look in his second fight with Fury. This however will no doubt give Wilder nightmares thinking back on it. Wilder claimed the suit was too heavy as he made his entrance to the ring which in turn tired him out…Despite these excuses, you can not deny this was tremendous effort.

And that wraps up this boxing list article, for more content like this why not check out some of the following articles on Boxing Apparel below: