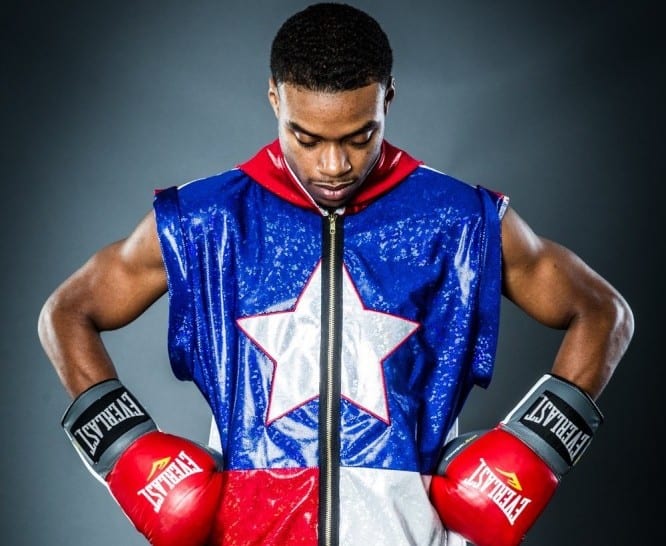 Errol “The Truth” Spence Jr is currently considered one of the top boxing champions today due to his powerful, aggressive, and economical boxing style. Every time the welterweight steps into the ring he always looking to do some damage and prove why he is pound for pound one of the best!

In this post, I’ll look at Spence’s background, accomplishments, and of course look at his effective and powerful boxing style.

You can watch my video version or can continue reading below:

Who is Errol Spence Jr?

Errol Spence Jr is an American professional boxer and currently a unified world welterweight champion. Originally from Long Island, New York. He now resides in Dallas, Texas where he trains with his coach Derrick James. Spence had a strong amateur career, winning the famous U.S. National Golden Gloves tournament and three consecutive U.S. national amateur welterweight championships. These strong performances led him to attend the 2012 London Olympics where he reached the quarter-finals only to fall short of potentially winning a medal in the next stage to Russian amateur Zamkovoy.

Soon after this disappointment, Spence turned professional and he quickly started to make a mark on the division with opponents he came across, after 21 fights he finally got his big shot for the IBF world welterweight title against champion Kell Brook who he defeated convincingly in Sheffield, England.

The opponents have continued to grow in stature as Spence defeated 4-weight world champion Mikey Garcia and then Shawn Porter for the WBC title. Not long after this win, Spence was in a horrendous car crash which he somehow survived. After a year out of the ring, he made him come back against former Welterweight Danny Garcia where he still looked just as good before the accident.

Although Spence may have never really traveled too much on the international amateur scene he certainly made a mark in the U.S. amateur system including winning the prestigious Golden Gloves tournament. Spence’s success here resulted in him being selected for the US Olympic team which I feel helped him grow his strong boxing fundamentals where he has since gone on to win and unify in the welterweight division.

What is Spence Jr’s Boxing Style?

The American has a very effective and economical style which primarily uses his aggressive pressure with the jab to set up a straight left hand to head or body. Being a southpaw he uses this to his advantage against orthodox fighters who tend to struggle.

Due to Spence’s amateur background, he also has very good fundamental boxing skills fighting on the back foot using his jab to maneuver his opponent (watch his fight against Garcia). The other side of his game is his inside fighting skills were a lot of fighters struggle to withstand his aggression, bodywork, and power.

Overall you could argue Spence is the perfect ‘Boxer Puncher‘ combined with elements of a swarmer.

Read on for more detail on his boxing style below.

Spence in my opinion has one of the heaviest jabs in boxing which he uses beautifully when in the ring. The former Olympian does this by coming in behind his right-handed jab by pushing forward with his feet to apply more pressure on his opponent. Naturally, this helps to push back his competitor and allows Spence to set up his powerful left straight or hook.

Another great example of Spence using his jab effectively was against Mikey Garcia, where instead of letting the smaller man get inside him, he simply used it for measuring distance and keeping the smaller man at range. The man from Texas is generally considered quite a big welterweight and he uses this size to his advantage.

Errol Spence arguably is one of the best fighters today at applying constant pressure on his opponent. He is tremendous at applying this pressure due to his understanding of the amount of distance that is required to put them on the back foot.

As I mentioned above the Jab is a key weapon for him to apply this pressure. He also has amazing ring generalship where he will control the center of the ring so he can push back his foe to the ropes, giving them no option but to waste more energy by moving or to try to stand toe to toe with Spence.

Another way Spence applies pressure is by using the shift technique. This is so he can quickly close the distance by setting up a power shot while also allowing him to catch his opponent off guard. Here he is using the Fitzsimmons shift against Mikey Garcia below.

I recommend you check out this great video below by The Fight Diary which has a closer look at Spence’s relentless pressure and some other skill sets.

Spence’s body punching is also up there with the best and once he gets close enough or tries to get on the inside his opponent can expect to receive some painful body shots. When Spence is on the offensive and if he is struggling to hit his opponent’s head, he will use this opportunity to attack the body.

As a southpaw (vs orthodox) Errol Spence Jr will usually throw a right hook to the body when up close after a follow-up of attack. From here Spence is truly relentless, forcing his opponent to fight back or get the hell out the way!

The welterweight champ loves to invest in this area during a fight as attacking the body constantly can lead to the opponent’s guard opening up top. This has resulted in Spence getting some devastating KOs during his career.

Check out Reemus Boxing‘s breakdown on how Spence smartly targets the body to wipe out opponents.

Now when most people think of Errol Spence Jr they don’t think of counterpunching or defense, but this is part of Spence’s game which is truly underrated by many. The most typical counter he likes to use is a step-back jab and counter, which can be devastating if opponents aren’t ready for it.

The other subtle thing Spence does is the use of his footwork, he’s brilliant at maintaining and putting enough distance between himself and his competitor which makes him difficult to hit. (I recommend you read my article on Andre Ward for more footwork hints and tips).

On the inside, you can tell Spence has really worked hard at this side of his game, especially defensively where he catches shots with his glove and counters them. I highly recommend you watch Spence vs Porter see some of his best work catching and countering shots on the inside. He does get hit more than he normally would in this fight, but he has some tremendous moments!

Make sure to also check out this great video of Spence practicing his defense and counterpunching with his coach on the mitts, it’s beautiful stuff – watch below.

Errol Spence is truly one of the greatest boxer punchers of his generation and only time will tell if he fulfills his “truth” and wipes out all the other welterweights in the division.

If you are up an coming boxer who wants to use the correct fundamentals (southpaw or orthodox). Spence is a perfect example for you to learn from. His body punching is truly tremendous and I recommend you study this as he is in my opinion, one of the best.

I’m really looking forward to seeing how Spence vs Ugas on April 16th – check out my tactical overview video further below.