Oleksandr Usyk is arguably p4p one of the best in boxing today due to his very clinical and fluid boxing style which many of his opponents have struggled with over his amateur and professional career.

Having become undisputed Crusierweight champion in 2018, the Ukrainian has moved up to heavyweight to hopefully challenge for world title against the likes of Fury, Joshua and Wilder.

In this post, I’ll look at Usyk’s background, accomplishments and of course look at his effective and clinical boxing style.

Oleksandr Usyk is a Ukrainian boxer who born in Simferopol, Crimean Oblast and started boxing at the age of 15. Since turning to boxing in his mid teens, Usyk amassed an incredible amateur record of 335-15, it’s no wonder he has gone on to become one of the most talented boxers in the sport to date.

Starting his amateur career at Middleweight, as Usyk grew up into his body he slowly became a solid amateur Heavyweight Most notably Usyk won gold medals at the world championships in 2011 and the London 2012 Olympics. Usyk had achieved pretty much all he could do in his amateur career which meant only one way forward, turning professional.

Usyk started his Professional career in the crusierweight division in 2013 where he very comfortably got through his first 9 opponents before getting his first world title shot against tough Polish WBO champion Głowacki. After a few title defences, Usyk jumped at the chance of entering Season 1 of the World Boxing Super Series in the Crusierweight tournament. All 4 world title were up for grabs which meant perfect opportunity become undisputed champion. 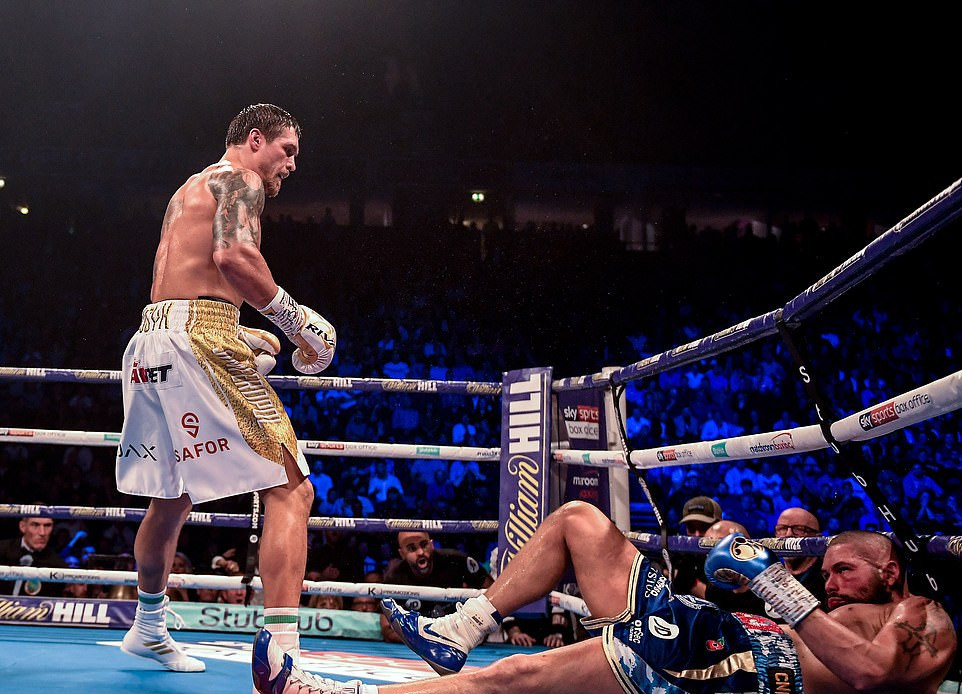 The Ukrainian got the through the tournament with relative ease defeating top world champions in Marco Huck, Mairis Briedis and Murat Gassiev in the final becoming first ever four-belt undisputed cruiserweight champion. Something which had not been done since Evander Holyfield.

After this huge milestone, Usyk took Tony Bellew to defend his Crusierweight titles one last time with a convincing 8th round KO. He has now moved up to the Heavyweight division in 2019 having had his first taste against Chas Witherspoon. It will be fascinating to see how the Ukrainian will get on against the Goliaths of the division in Fury, Joshua and Wilder. 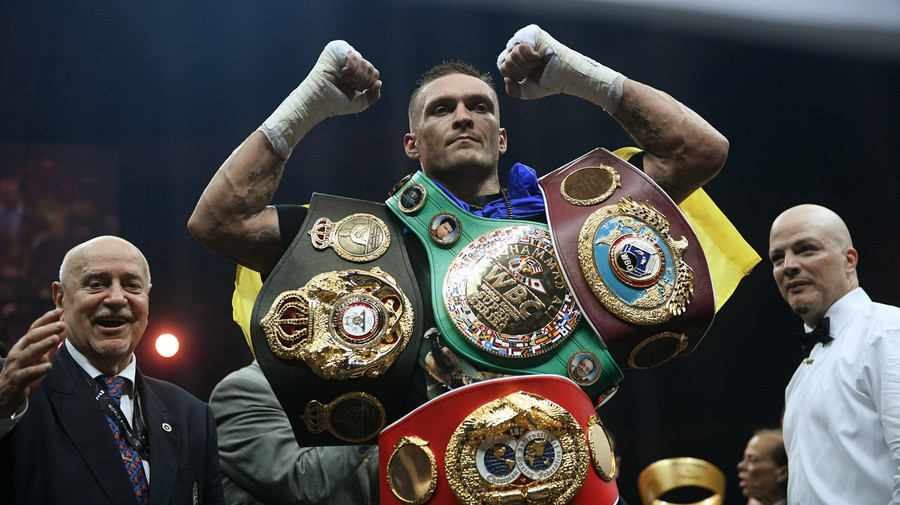 Oleksandr Usyk has without a doubt won everything asked him so far. With his dominating amateur career along with a very successful professional career to date – there is no doubt that he can go onto win world title at heavyweight.

What is Usyk’s Boxing Style

Usyk ‘s boxing name is the ‘The Cat’, and it’s no wonder he’s called that after watching him due to his slickness, agility and ‘pawing’ jab while in the ring.

Having trained in Ukrainian boxing system, Usyk has a very European boxing style which usually entails a good jab that is constantly pawing or being thrown, a high guard defense, good footwork, and sharp single shot counters.

Usyk of course has leaned all these fundamentals extensively during his amateur career and although fundamentally doesn’t look that exciting he is in fact very dangerous and clinical due to the fact he is a southpaw which causes most fighter problems.

One of the first things that get’s overlooked by Usyk is his incredible footwork and this is one of the key factors of how controls his opponent in the ring. He will primarily uses his feet to control and maintain pace of fight and try to control trying to put himself in the centre of the ring.

He will do this by using his jab (more about this below) to maintain distance from his opponent while pivoting around them, which helps offsets and keeps them off balance reducing the pressure on himself. As mentioned above he will also keep to the centre of the ring as much as possible avoiding getting caught up in the corners or ropes.

Usyk will also usually step in and out of range before throwing a combination of punches to try finish off his opponent if necessary .

The prime example to date of Usyk Footwork was against Gassiev in the World Boxing Super Series Final is truly incredible watch his footwork in this fight. Check out this awesome tweet by Lee Wylie below which demonstrate Usyk footwork with former p4p start Andre Ward explaining the importance of training your feet.

Very much like Lomachenko, Usyk uses his a pawing jab in and out constantly with feints to gauge how his opponent will react to his movements. The Ukrainian is very intelligent in how he does this as he will throw jabs to simpl apply more pressure on his foe without using too much energy.

This very much causes the competition to rush their work throwing unnecessary punches to stop or counter the pressure. However, due to the elite level of footwork and defense Usyk has, he is very much able to move out the way, block punches or hit back with a brutal combination. If his the opponent manages to get through this Usyk once again keep applying that pressure with jab with constant movement to tire them out! It truly is impressive!

Usyk is of course a southpaw which would make you think his lead had is in fact the stronger of the two. In fact like many of the great fighters of the past he leads with his stronger hand, but thanks to his extensive amateur career he simply perfect the technique of using his weaker left hand.

If anything I feel it give him a huge advantage over many opponents which he faces them as they mentioned above too much of focus is given to Usyk jab. When the Ukrainian spots an opening this is when he will throw straight left hand or hook to while moving to catch his opponent completely off guard.

This therefore helps him to create devastating punches when he throws a combination with the left hand.

I highly recommend you watch haNZAgod highlight video below of Usyk’s undisputed Crusierweight journey from winning Olympic Gold and turning professional to knocking out Tony Bellew.

Now primarily I would say it’s Usyk footwork which actually help him in most cases, but his high guard and constant slipping of punches plays a huge part in his defense.

By using the high guard, he is able to draw our unnecessary punches from his opponent while he is also able to protect himself from getting hit cleanly making him a harder target.

The other aspect is his use of slipping punches, Usyk and most of the elite fighter will in fact do this obviously to move out out the way of punches, but most importantly be able to gauge the distance from himself and the opposition.

These subtle move may seem like nothing to most people, but overall they make a huge impact in him not getting caught up on the inside or getting hit.

I don’t care who are, but for me Usyk is p4p in the top 5 boxers in the world at the moment. The fact he has gone through a very talented Crusierweight division never being in any big trouble throughout tells it all in my opinion.

If you are someone who is looking to improve their footwork and apply pressure with the jab he is sublime example to follow. I highly recommend you watch his fight with Gassiev to really see this in action beautifully.

In terms of his move up to the heavyweight division it will be facilitating to see how he will get on against the giants of the division and if he will be too small to cause any sort or damage or problems. Time will tell, but somehow I can see him figuring out a way to dismantle most of them.

I’ll leave you with the great video by IGLUboxing below who looks at how Usyk will cope with the big boys!

Hope you enjoyed this boxing style review and make sure to let me know if there are any more boxer styles you would like me to feature in the comments below.

Check out my other boxer style analysis features here.