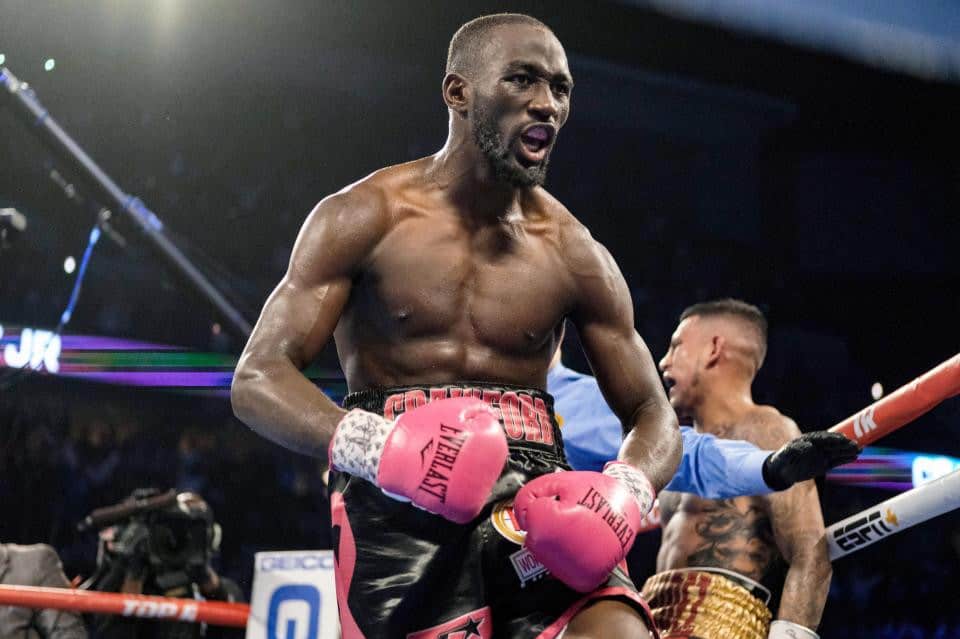 Terence “Bud” Crawford is arguably one of the most complete boxers in the world today and is in the top 3 in many people’s pound for pound lists.

His unique style of being able to switch and fight from both stances with ease naturally is something you don’t see often and makes him a true puzzle for any opponent that faces him.

In this boxing style analysis I will give you a quick look at Crawford’s background, accomplishments and of course look at his switch stance boxing style for you to take and learn from.

Watch below or read on to find out more.

Who is Terence Crawford?

Terence “Bud” Crawford is originally from Omaha, Nebraska which of course is not really known for producing the best boxers in the US. However, they certainly have the claim now in having one of world’s best in Terence Crawford.

Starting his career way back in 2008, Crawford has slowly developed himself over the years into one of the most complete fighters we have seen today in the sport of boxing.

Terence Crawford himself is a 3 weight world champion, starting at lightweight he won his first world title back in 2014 against Scottish boxer Ricky Burns for the WBO world lightweight title. He then went onto have two notable wins over Gamboa and Beltran before moving up in weight.

Bud then went onto fight at super lightweight where he has had most of his success as a professional to date. In 2017 Crawford became the first male boxer to simultaneously hold all four major world titles in boxing since Jermain Taylor in 2005, and is one of only eight boxers in history to do so, male or female!

After claiming all the belts at super lightweight, Bud made the obvious move up to Welterweight where he has so far claimed the WBO belt against Jeff Horn. However with Crawford fighting under the Top Rank promotion, he has struggled to get the big fights against likes of Errol Spence Jr, Danny Garcia, Keith Thurman who all fight under PBC promotion. We can only hope over the coming years the two promotion companies can work together to make some huge Welterweight fights.

Crawford’s next test will be against former British IBF welterweight world champion Kell Brook who arguably could be his toughest test to date.

As mentioned above, Crawford has a complete boxing style where he adapts to what type of boxing style his opponent has. Due to this, Crawford’s boxing IQ is exceptional where we have seen him box by using a range of tactics and techniques including applying pressure, counter punching, defense manoeuvrability, infighting, and power shots with tremendous finishing ability.

One of the most difficult aspects his competition finds in the ring is his ability to switch from Southpaw to Orthodox (vice versa), as he is able to box comfortably from both stances. However, he will more often than not box from a Southpaw position in most cases, as most of the orthodox fighters he has faced to date have struggled with the American in this stance.

This is without a doubt a style Crawford has perfected over his whole career which is very unique to see in today modern boxing as it takes years to perfect one stance and is still able to apply all his techniques comfortably either way.

Crawford primarily fights mostly out of a southpaw stance and will tend to use this against most of the opponents he comes up against as mentioned above.

When up against orthodox fighters he will tend to still fight in a Southpaw stance more often than not, but will switch mid round or even for a full round depending on how his opponent is coming at him. His relaxed movement in this stance often sees orthodox fighters overcommit and get hit by powerful counters. It also helps to keep the range comfortable for him, especially with his longer reach considering his height of 5ft 8 (reach: 74 in)

Against southpaws he’s tended to stay as southpaw himself due to the unusual style match up that it brings to them and will use this to counter with body shots. (Watch Crawford vs Indongo)

He almost appears ambidextrous at times (the ability to use both hands or feet just well as the other), but he has simply just perfected both stances depending on the situation he is in.

Check out these great videos below of Roy Jones Jr talking about Crawford’s switch stance and of the welterweight champ shadow boxing in and out of Southpaw and Orthodox stances:

Crawford’s jab is probably one of his most underrated aspects of his game, where the Nebraska fighter will use this primarily as range finder and to parry with his opponent to counter over the top or set up counter punches.

When he switches to orthodox, his jab is often used when he is applying pressure to set up his deadly left or right hooks that shaken and taken down many of his opponents.

You will also often see Crawford use feints with his lead hand to keep his opposition guessing.

Bud’s footwork is definitely a big part of his defensive game and also often gets overlooked, but this is part of his overall boxing IQ. He will often shuffle back in straight lines, use pivots left or right and circle round his opposition using Lateral steps in his footwork – especially when he is on the backfoot.

By using his feet as his main defense, he is very elusive and hard to hit for anyone that has faced him showing the importance of using feet.

Crawford’s counter punching often comes in the form of counter right hooks that usually catches orthodox stance fighters off guard when they throw a jab. Once Bud knows he has them hurt he will go on full offense by applying pressure throwing left hooks and straight punches and even changing stance to catch them off guard.

(Make sure to check out my top 6 defensive techniques blog)

Crawford is without a doubt one of the best finishers in boxing, especially when you consider he has fought in numerous world title fights since 2014.

As mentioned above Crawford will often counter his opponent with a powerful left or right hook once they have overcommitted the jab or offense in general. In most cases that immediately puts his opponent on the back foot as they look to defend themselves.

Crawford will then apply pressure by throwing a flurry of combinations attacks to the body and head from different angles meaning a typical end of the bout for whoever he is up against.

He does leave himself open at times and gets clipped, but more often than not he has been able to take punches. The risk/reward ratio usually favours him due to his power to finish off a challenger once he has them hurt.

Check out this great video by Hanzagod below who shows some of Crawford’s best moments and finishing as he made his way to become undisputed super-lightweight champion and WBO welterweight champion.

Adaptability to any style.

Crawford’s overall ability to adapt to any opponent’s style proves he is one of the most complete fighters. He knows styles make fights, so adapts accordingly to who he is facing and not necessarily fighting the same way every fight. This is what makes Crawford one the world best boxers today in my opinion.

Obviously being able to fight from both stances is a huge factor but it’s his boxing IQ and development of fighting many boxing styles over the years that have made him successful.

Below is a video by Lee Wylie who brilliantly demonstrates how Crawford adapts to the following boxing styles – Speedy boxer, boxer-puncher, pressure fighter, rangy southpaw and brawler.

For me Terence Crawford is a joy to watch as he is a proven finisher and can adapt to anything thrown at him in the ring.

It will be interesting to see if he will go onto fight like Errol Spence Jr which will know doubt be one of the next big super fights in boxing and really hope we will get to see these two pound for pound stars fight one day.

In terms of what we can learn from Crawford, I personally recommend perfecting your natural stance. However, being able to switch stance is a very important aspect if your training depends on the opponent or the positions you get yourself in the ring. I highly recommend watching Crawford if you are a boxer who likes to switch stances so you can see how he does this so effortlessly.

Hope you enjoyed this boxing style analysis review and make sure to let me know if there are any more boxer styles you would like me to feature in the comments below.

Check out my other boxer style analysis features here or why not check out my analysis on his potential future opponent in Errol Spence Jr here.