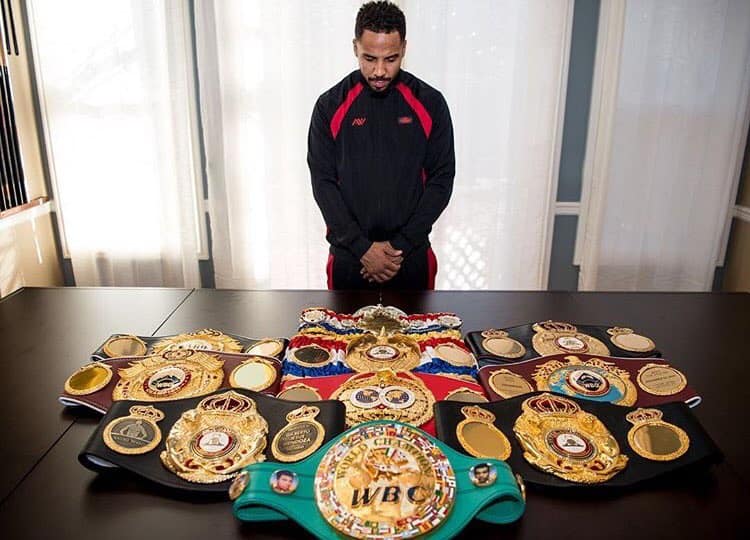 Back in 2018 former pound for pound star, two weight world champion and Hall of famer, Andre Ward, really caught my eye on Twitter. It was a tweet thread on 10 habits you should avoid if you want to be a success in boxing. It was a real eye-opener to me and as someone who is a boxer myself, it really reminded myself what it takes to be a real success in the sport and even in life.

The great thing about what Andre did here was he actually talks about lifestyle and personality stuff which sometimes doesn’t get mentioned enough or educated to up and coming fighters. Some points are fairly obvious, but it’s a healthy reminder for anyone who wants to go somewhere in boxing or even in life. Whether that turning pro, greatly improving your skill set or even becoming world champion.

Here are Ward’s 10 habits to avoid if you want to succeed in boxing.

1. Putting drugs or alcohol in your system

I think this is fairly obvious one to start with, but also very important one. If your someone who is constantly drinking and taking recreational drugs in the sport… Let’s be honest… you are not going to go far, especially in boxing.

Almost all recreational drugs will almost certainly pull you up for a ban if you are to get tested at any point.

Drinking, of course will affect your overall performance as well if you are doing this while training or even leading up to a fight.

If you are going to have drink, use it for chance to enjoy a special moment, don’t be doing it every weekend you have chance. Maybe giving it up altogether is the best option for some people to give you an advantage over the rest if you want to reach the top.

This truly can be a fighter’s nightmare in between fights, as putting on too much weight results in you having to cut weight!

I have been really guilty of this in the past putting on too much weight while I wasn’t training and trust me it’s not fun trying to cut the weight for a fight.

This very much leads onto Andre’s third point below.

3. Only training when you have a fight coming up

This is so important, by continuing to work on your boxing craft and skills when you don’t have any fight lined up will truly benefit you in the long run.

Not only will it help you continue working on improving skills, tactics and technique, you won’t have to worry too much about cutting weight by the time you do have to fight!

All the best fighter’s continually stay in gym even after their biggest fights and if you do the same you will no doubt make more progression.

It’s important to take a decent break, but don’t stay away for too long.

4. Believing in your own hype (there is always more work to do)

Ward makes a really valid point about this as I have seen this in the boxing gym before where a fighter can really get caught up thinking he is the best next thing.

It’s a really dangerous to believe you are “that good”, as in boxing ‘styles make fights’. You could be one of the best up and coming boxer around, but if you don’t continually work and learn on how to adapt someone eventually will be able to break you down.

Having high confidence in your ability is a good thing to have, just don’t let it get to your head.

We all need to be able to go out and enjoy yourself once in a while, but all too often you will hear of top boxers “loving the night-life” a bit too much!

This can tie in with hanging out with the wrong people and goes back to the first point of taking drugs or drinking too much.

Just be careful falling into this trap too often.

6. Believing that you can’t be beat

Everyone can be beat, it’s that simple!

Like I said further above it’s good to have confidence and believe you will win against your opponent. But one punch in boxing can change everything, it’s all it sometimes takes to change a fight. Think about Buster Douglas defeating Mike Tyson or Ruiz beating Joshua – no one thought it would be possible.

Always respect your opponents ability no matter what, even if you really dislike them as a person.

7. Listening to people who only gas you up and tell you what you want to hear

I gave the above image as example – the amount of people in Anthony Joshua’s team, I do imagine he does get criticism from some team members, but I can also imagine a lot of “Yes” men in there too!

Even with your friends outside the boxing environment, everyone telling you that you’re amazing and you did so well in your last fight is real confidence booster. However, sometimes you need to hear opposite opinion off someone who tells it how it is but trust at the same time.

Ask your coach about the negatives or what you can improve on, it is the best way to counteract this.

Hah! I personally have been very guilty of this in the past and it’s something we all fall victim to at some point in your life.

But it’s turning these into habits if you truly want to have the success you want from boxing, which will reduce your laziness.

9. Pride (not allowing yourself to progress and be taught)

Never think that you know everything, because you don’t! You simply can’t see everything that is going on in the ring. Your coach has the privilege of watching from other perspective to look at you technique and give you advice.

Listening can sometimes be your greatest strength when you are training, it can be the difference between making the right or wrong decision.

If you are unsure over someones’ advice or coaching, ask more people for their opinion to get to the bottom of what’s right.

10. Entitlement (nobody owes you anything)

The fantastic thing about boxing is that no one is entitled to anything when you first start. At the end of the day it usually comes down to the man or woman who wants it more when you both enter into the ring.

It’s not about being entitled, it’s about how hard you have to work to get there – eventually you get the reward you deserve for the work you put in. Just like with everything.

It really makes me laugh when so called tough guys come into the boxing gym for first time thinking they can beat up someone, only to never come back after one sparring session.

Any of these bad habits are easy to pick from time to time, but it’s worth reminding yourself of these if you really want go somewhere in the sport of boxing. It’s without a doubt a hard lifestyle if you want to reach the top, but it can also be one of the most rewarding.

To finish off I’ll leave you with this brilliant quote from Ward and truly believe it is true:

Check out more or our motivation articles here or why not look at my boxing style analysis on Andre Ward here.

If you are into the law of attraction make sure to have a look at the Manifestation Breakthrough Kit, for a limited time and it is totally FREE of charge. You can combine this kit with what you’ve learned here get rid of these bad habits. Find out here.