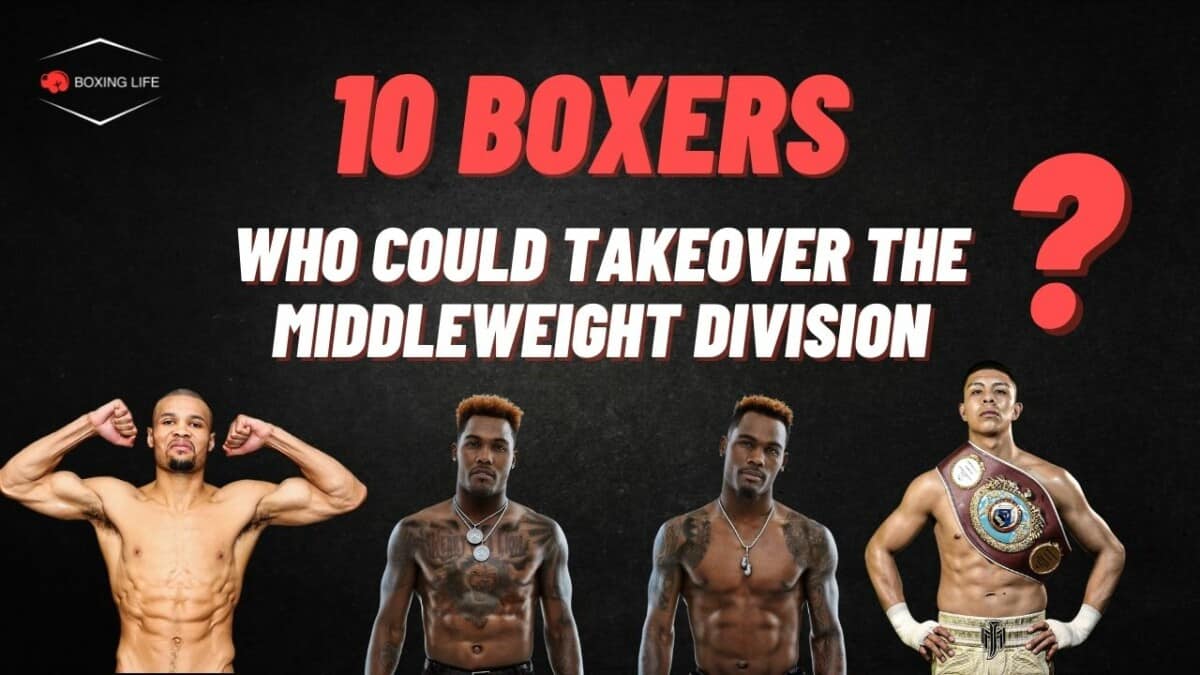 The middleweight category in boxing is one of the original and glamour divisions. Which has always had great interest by boxing fanatics. But who could be that next star in the division? In this boxing list, I take a look at 10 boxers who could potentially fight out over the next few years to become the number one middleweight.

With the likes of Canelo Alvarez having moved up to super middleweight, Golovkin at the end of his career and even Andrade potentially looking to move up in weight soon. I’m expecting much change in the division over the next few years.

I have based this list off current activity, achievements and their talent from when I published this list. Some of the fighters are yet to fight at middleweight, but I wouldn’t be surprised if many some of them move up in weight.

Read on to see the full list or watch below:

The young and hard working Mexican is only in his mid 20s and already has amassed 37 victores with 30 KO’s! Having won his first world title against Sadam Ali 2018 for the WBO super welterweight title. Munguia has not stopped with six defenses of his title, before deciding to move up to middleweight.

At 6ft he’s definitely big enough and could even move up in weight if he does well at middleweight. I love his come forward approach, but I have noticed some holes in his game. Let’s hope we can see him fight some top names in the future for a world middleweight title.

The Kazak and potential proceed Gennedy Golovkin is Zhanibek Alimkhanuly! Another hard hitting Kazak who has an impressive amatuer career with gold at 2013 world championships. He failed however to win an Olympic medal in the 2016 games, after losing the quarter finals, deciding to turn pro soon after.

Since going professional the Kazak has looked impressive and definitely has the potential to win or challenge for a world title. In his toughest test yet. Alimkhanuly faced former WBA (Regular) champion Rob Brant, in which he put on a convincing display recently. It will be fascinating to see how he develops.

Cash is probably a wild card for most on this list, but the Brit has been building himself up since his debut on the Joshua vs Breazeale undercard in 2016. Since then Cash has gone on to win the British and Commonwealth titles fairly convincingly.

For me he has not been moved along quickly enough while with Eddie Hearn’s Matchroom and definitely has been seen as a background fighter. However he always comes to fight and has knockout power to take out anyone in my opinion. I’d love to see him get a big fight soon on the world stage and see if he has what it takes to challenge or win a world title.

If he gets the rematch with Castano and wins, I can’t see him staying at the weight for too long. I would be surprised if he decides to try to dominate the middleweight division with his brother. I recommend you check out my short breakdown analysis on my YouTube of Jermell Charlo if that interests you.

Of course I can’t miss out the other Charlo twin on this list and that is of course Jermall Charlo. Having moved up to middleweight already in 2019, he has already operated at that weight. Jermall is definitely considered the the harder puncher of the two brothers with 22 KOS compared to his brother 18 KOs. However, I believe Jermell has had the harder fights of the two.

With him pretty settled there right now, it would be good to see if Jermall can get a unification fight with the likes of Andrade, Golovkin or Murata or fight one of the other potentials on this list.

The son of Kostya Tszyu, so far is definitely living up to the hype in my opinion and looks like he has the potential to be just as good as his Dad. The Australian definitely has that knockout power with 15 KO’s on his record to date!

So far he has only fought in the super welterweight division, but I think he is definitely good enough to move up to that weight eventually. He is the same height as Canelo, and in my opinion packs a punch just like the Mexican star. I’m looking forward to seeing how Tszyu’s career will progress once he starts to fight regularly on the world stage.

The Brit has had a pretty mixed career to date, switching between middleweight and super middleweight divisions. Having signed a recent new deal with Sky in the UK, he will be going into the final part of his career hoping to get some big fights and of course win a world title.

Everytime Eubank Jr has really stepped up in opposition against the likes of Billy Joe Saunders and Geroge Groves. He has fallen short in earning victory, but has still been relatively competitive. His big win to date was against former Gold Olympian and world champion James Degale. He’s definitely one to call out the big names such as Golovkin. I’m not sure if he will win a world title, but I can see him getting one last chance.

When Lubin first burst onto the scene, he was seen as a guy that could potentially challenge the Charlo brothers for their world titles at super welterweight. However, after getting his match up against Jermell Charlo, he suffered a devastating KO and has been rebuilding himself ever since.

With Lubin only in his mid 20s, he definitely still has a few more years at super welterweight, but I could see him operating at Middleweight eventually. The southpaw had a really good display against Rosario, and if he keeps progressing, he could potentially get a rematch with Charlo at Middleweight.

Now some of you will probably think Hurd should not be on this list, but I do believe he has the potential to bounce back after those two high profile defeats to Julian Williams and Luis Arias. First off he’s always looked huge for super welterweight and can only imagine it is a real struggle for him to get down to that weight.

Now in his early 30s, a new start at middleweight looks like a good opportunity for him to get back to the top and make weight more comfortably. Having been unified world champion already, he definitely has enough of draw to get a fight at that weight, maybe he can finally get that fight with one of the Charlo brothers

The Russian from Dagestan was a former world youth champion in 2008 at bantamweight. Since then the Russian has grown into his body and is currently operating at super welterweight. He is a very interesting fighter to watch as he fights in a philly shell stance, which is something you wouldn’t expect to see from a typical European Boxing Stance.

He does have power, but it is his defense and skill set that could take far in his career. Standing at 5’10, he is definitely big enough to compete at middleweight and, personally, can see him fighting there eventually. His last display however against Liam Smith, was far from his best and probably should not have won that fight. He is definitely still one to keep an eye on.

Believe it or not I still wouldn’t be surprised if Golovkin continues to fight for at least 2-3 years. He only fought once this year which is disappointing. It makes you think what is going on there? Maybe it’s just been difficult for him to get the fight? Maybe the fight with Murata will finally happen on New Year’s Day as the Japanese usually do around that time.

Whatever is going on, I could still see GGG beating many of the middleweight on this list. But with him taking so much time off, it makes me concerned if he does go back into the ring.

Check out my boxing style analysis blog on Golovkin here.

Hope you enjoyed this boxing list, let me know in the comments below who you think will challenge or reign over the middleweight division over the next few years. Personally I think Munguia, Charlo twins or Alimkhanuly  look very promising.

Make sure check out my related articles on the following